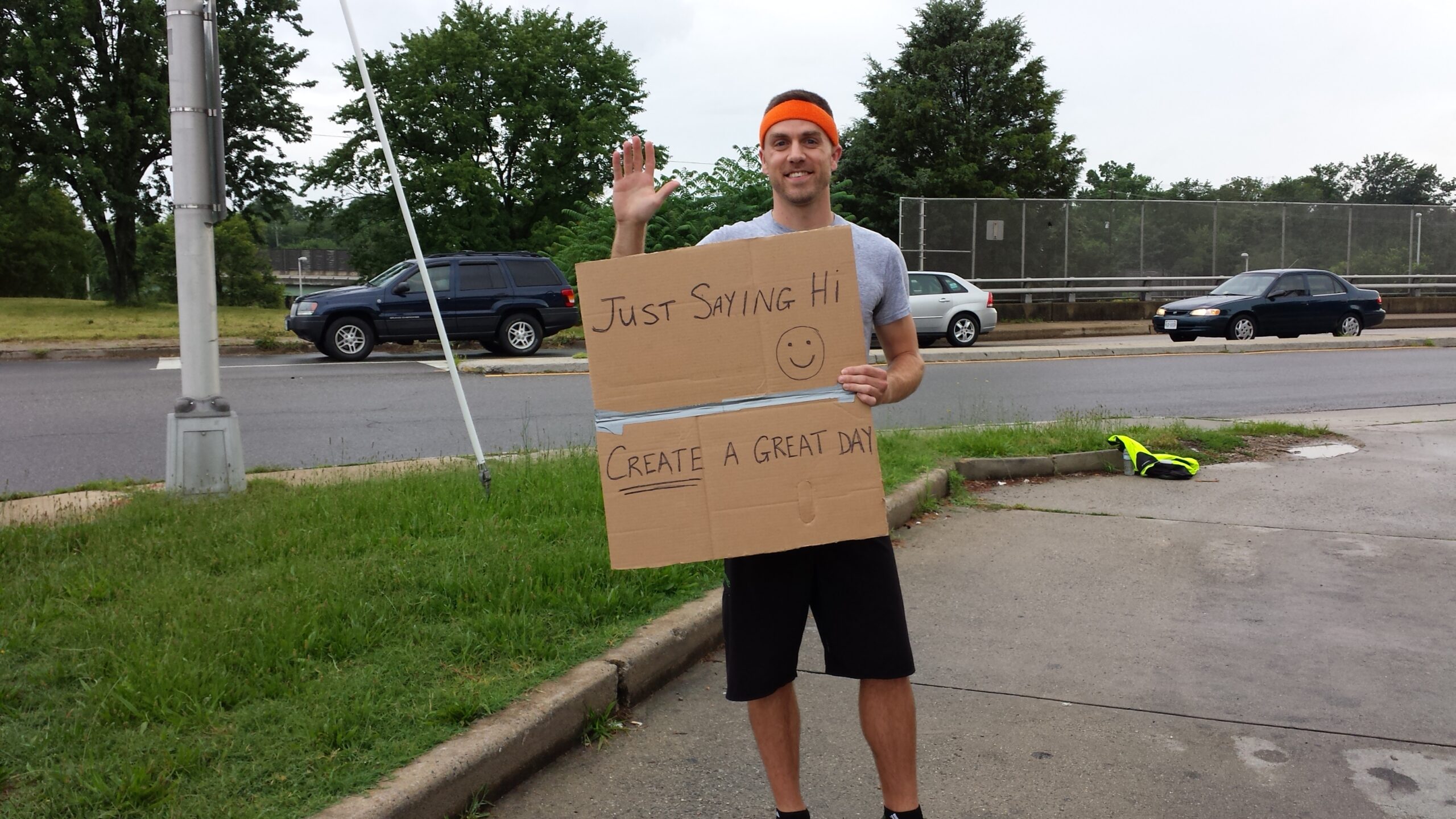 Well… that was extremely uncomfortable, and fantastic, all at the same time. What an interesting experiment & rewarding experience.

First off, big thanks to my friend, Hilary Corna, for the idea/dare. I would have never thought to do this otherwise.

Here’s the recap of me standing on the corner for one hour, holding a cardboard sign that read,

A quick overview of my experience, by the numbers. For more in-depth commentary, read on past the list.

Less than 10 minutes into standing on the corner holding my sign, a young man wearing a trash bag walked by (it was raining fairly hard for 1/2 my time out there). I said hello. He said hello back, as he passed. After getting 2 steps passed me, he stopped, and reached into his pocket. It took him a while before he pulled his hand out. Neither one of us said a word. When his hand emerged, he had about 50¢ in change. He was about to hand it to me, and then he saw what the sign said.

“Oh… you’re not doing this for money?,” he said, with a look of utter confusion. “No. Just for smiles,” I replied. His confusion quickly turned into joy, as he said to me,

“That’s probably the most optimistic thing I’ve ever seen.”

We exchanged ‘Have a nice day’s, and both marched on.

About 10 minutes later, another man walked by. He was also surprised when I told him I wasn’t doing it for money. He had a cardboard sign of his own, and was actually planning to sit at the same corner & ask for money.

He said, “You’re not asking for money? You’re just doing it to make people’s day?” After replying yes, he asked if I would mind if he set up right around the corner, adding, “I’m trying to make a few bucks so I can eat.”

I told him I didn’t mind at all. Before he completely walked away, I was wondering if me standing there would help, hurt or have no impact on his efforts to make a buck. I said this to him, and he said he didn’t think it mattered, and that he’d be around the corner, where the cars couldn’t really see my sign.

I heightened my senses a little bit with him standing right around the corner. I had placed my jacket over a railing right by the intersection, and shortly moved it closer to me, up the road a bit, so I could keep an eye on it. I got a much different vibe from this guy than I did the previous man I spoke with.

Over the next 30 minutes, there were 2 times where he left his post, and slowly walked by me, as if he was leaving. Both times he slowed right as he passed my jacket. He was between me & the jacket, and each time this occurred, I looked back at him until he passed.

The first time he didn’t say anything walking by, but got only 5 steps passed me before turning around & returning to his post, saying, “I guess I’ll keep trying…”

After another 10 minutes went by, he did the same thing, passing me slowly, between my jacket & me. After getting 5 steps passed, he turned and said, “Do you know if it’s supposed to rain like this all night?” (Where’s Andrew Friedman when you need him?) Wishing I could be more helpful, I honestly told him that I just didn’t know. He then walked back by me, slowly, as if he was wondering or lost, and returned to his post yet again.

I tried my absolute best to judge this guy not based on the fact that he was homeless (or at least I’m assuming that’s why he was asking for money), but in the same manner I would draw assumptions about anyone, anywhere, in any situation—first, with keen observation, and then my gut feeling based on those observations. And I am confident that’s what I did.

There were 2 times where parents were driving with kids in the car (under 10-yrs-old), and the kids rolled down their windows to wave & say hello. The parents also had big smiles on their faces, but they were no match for the kids’ elation.

Something about the kids’ enjoyment of it moved me more than any of the adults who showed their appreciation. I wonder how I would’ve acted as a kid if I saw that. Should we tip our hat to the parents of those kids, for raising happy, open-minded, outgoing kids? Or do we chalk it up to kids just being kids?

I do think there’s a certain ignorance that cannot be overlooked. Those kids have probably experienced very few, if any, homeless people on the street holding cardboard signs. They don’t jump to the same conclusions that many adults do, and that some people in their cars assumed about me… that I was standing on the corner, holding a cardboard sign, for one reason, and one reason only: to ask for money.

As adults, we’ve had more time to experience life. For some of us, this experience has opened our minds to incredible things, amazing people & some of the most beautiful acts of kindness the world has ever seen. For others, unfortunately, this life experience has infected minds with fear & pessimism.

It’s the same life we’re living. The only difference is how we choose to let it affect us.

While the entire hour was very uncomfortable, I was caught off guard by how quickly & consistently my confidence rose & fell. I would get 3 honks & a bunch of smiles in a row, and the next traffic light cycle, 4 cars stopped, easily in view of the sign, didn’t even look over at me, even after a big smile and a wave.

There were definitely more smiles, waves & honks than there were negatives. There were some people who saw the sign & showed no reaction. Others neglected to make any eye contact. But I’d venture to say, of all the people who made some kind of effort to notice me, easily more than 50% smiled/waved/honked. Probably close to 75%/25%.

I’ve been shot down before (by colleges, my parents, prospective employers, conference organizers, girls, you name it). But never like this.

Nearing the end of my hour on the corner, a man was walking by with a small bag of something he had just bought, and an umbrella over his head. I (made the mistake? of) didn’t clearly show him my sign before I asked him a favor.

“Excuse me, sir. Would you mind doing me a favor? Could you take a picture of me?”

His response was similar to that of millions of people around the world every day when they encounter a person on a street corner holding a cardboard sign. He barely glanced up at me, looked down to the ground & silently shook his head no.

Realizing there were very few people walking past me, I didn’t think I’d have many opportunities to get someone to take a picture of me. After the gentleman passed, and I realized he thought I was looking for something in return, I called out, “No, no… I’m just doing something nice. I’m not asking for money.”

He did acknowledge me again, very briefly stopped, and said [something like this, it was tough to hear him], “Yeah. Is that all?” But he turned right back around & kept walking. I tried to hold my sign in his direction so he could read it, but I don’t think he gave it enough time. Or he didn’t believe me. Or he just felt uncomfortable (if it’s that last one, dude should spend an hour in my shoes & then we’ll ask him about uncomfortable).

Did I wave at certain types of cars over others? Did I smile more at men, women, caucasians, african americans, BMWs, pickup trucks, etc.?

Who waved back? Were the young women just waving because they thought I was cute? (Sorry. Quick tangent for a little ego boost. Hey, after spending an hour on the corner, I can understand why someone might need a pick-me-up.)

As best I could keep track in my head, here’s how I would break it down.

…might actually have been holding a smile non-stop for one hour.

The Gas Station & Walk Back To My Car

Before I started walking back to my car (about 2 blocks), I thought about giving my sign to the homeless guy who was still on the adjacent corner. He had a really small cardboard sign (not sure what it said). I don’t know if mine would’ve helped, or how he would’ve used it, but it would’ve been a nice gesture. The only reason I didn’t was because I still wanted a picture of myself holding the sign. I wish I trusted the homeless man enough to ask him—and believe me, I definitely thought about it—but my gut told me not to.

I stopped at the gas station on the next block/corner, and before I could even ask someone, a woman looked up from the pump, smiled, and said hello. She saw me on the corner with the sign a few minutes prior, and asked why I was doing it. I briefly explained, and then asked if she’d take a picture. She kindly agreed.

After the photo opp, one more gentleman approached. He was just making light conversation, also curious as to why I was doing it. We talked for a minute, shook hands, and went on with our evenings.

What Did I Miss?

Looking back, there are a few things I wish I had done.

…and there just might be a next time. I’d be interesting to switch things up a bit & perhaps try again. If I did it again, I’d probably either:

a) Bring a boombox, a friend (preferably Ellen DeGeneres) and a sign that says “Dance Off!”, and, well… dance.

b) Offer to give people something. Perhaps, a smiley face sticker, or a hand-written card.

So… would you give this a try? How might you approach it differently?

And yes, I’d 100% recommend you try it. Please be safe, do it on a well-traveled corner, in daylight, and let others know where you’ll be & when you’re returning. Use your best judgement if & when talking to strangers (yup, the same thing mommy taught you when you were 5 still applies).