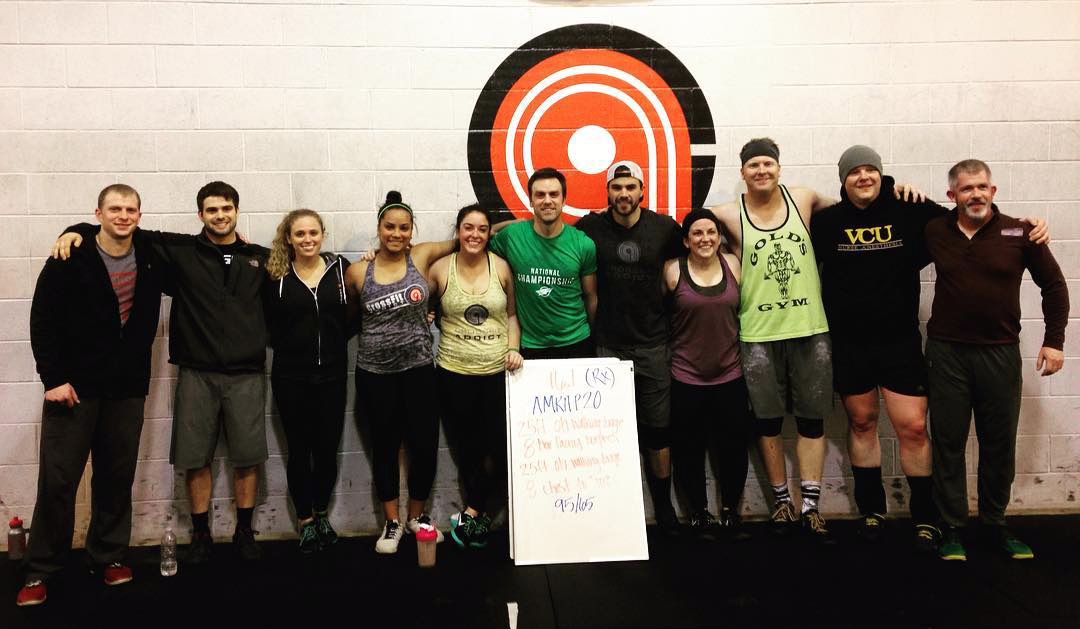 So much to talk about, I’m not sure where to start.

This year marks my third consecutive CrossFit Open since starting at CrossFit Addict back in December 2013.

I had no idea what to expect. It was all new to me, but it became quite apparent that something special was happening during those 5 weeks. I just couldn’t put my finger on it.

with a little over a year of experience, and a decent amount of fitness that was missing the year before, I embraced the Open. I inserted myself head first into the vortex of energy that transpired over the next 5 weeks. I challenged myself by picking a rabbit and publicly calling him out. We had quite the showdown.

While I had my own battle going on with McCloud, there was no shortage of memorable moments being carved into Addict history. Every Thursday night we gathered around, anxiously awaiting the announcement. “15.1 is…”

We sat on boxes that were made for jumping. We smiled, laughed, cried, drank beer, yelled our faces off, and worked damn hard, until there was nothing left to give. We came together, as one community; united, determined, inspired… and on a mission.

Like most successful missions, it took a team of many to accomplish our goals. No man or woman was left behind. No workout was left unfinished.

Coach Trey has a saying, and it goes something like this:

I want everyone to walk out that door feeling like a champion.

We can debate all day long whether champions are born or made, but I propose a third option: a champion is a state-of-mind. Champions portray a visceral confidence that penetrates the skin and infects those around them with subtle waves of courage & determination.

I had my moments in 2015. I got stronger, faster, more flexible, improved my technique, and blossomed into a more well-rounded athlete. For that, I am proud.

But for much of my adult life, and still to this day, the thing that really lights up my heart, is watching others walk out that door as champions.

our community has grown. As any group gets larger, it typically becomes more difficult to maintain the same level of camaraderie amongst its members. The glue that binds us together begins to crack. The edges start to peel away. Relationships slowly & silently wither, and smaller cliques develop within the larger community.

I couldn’t be happier that this is not the case at CrossFit Addict. Our glue is strong. Our edges, sharp. Our relationships, strengthened. New members are welcomed with open arms & open minds, and seamlessly weaved into the very fabric of our community. The second you walk into that door, you are family.

There were a amazing performances all weekend long, but in terms of shear fitness, 4 stood out above all.

Danielle lunged away with the top spot in the gym with 245 reps. The number speaks for itself. Simply impressive.

But the battle for 2nd was inspiring. On Friday night, Steph executed her plan with precision, maintaining a near identical pace for every round. She missed her last chest-to-bar pullup in the eighth round by half a second, finishing with 207 reps (10 reps more than the next best score).

But Trey was not to be outdone. He gave it a 2nd try, and hit his last chest-to-bar in round eight with 1 second left, finishing at 208 reps. Bottom line: competition makes us better.

It’s also worth highlighting Martha’s 277 reps in the scaled master’s division. It was the 10th best scaled performance for her age group in the Mid Atlantic region.

Kashia has screws in one of her feet at the big toe joint. It’s incredibly painful when she flexes her foot at that joint. When she competed in a team competition a few months ago, and lunges were announced, she did them all on one leg so she didn’t have to bend her foot.

16.1 called for walking lunges, with alternating legs. If she wanted to compete, she had no choice.

Like the champion she is, she cut out part of her insole to allow for more mobility, slapped on an ankle brace for stability… and crushed it. 187 reps. 3rd woman & 5th overall in the gym. A gutty performance I’m sure she’ll never forget.

But 16.1 was about much more than high scores. It was a workout of firsts, badasses, on-the-spot decisions, and silly costumes.

Drew is a regular 6:45er, and he tackled 16.1 in the last heat of Friday night. I talked to Drew while he was warming up. He wasn’t sure if he could handle 95# overhead, but after some practice lunges, decided to give it a go.

And he gave it his all. 20 minutes of work. Everything he had. 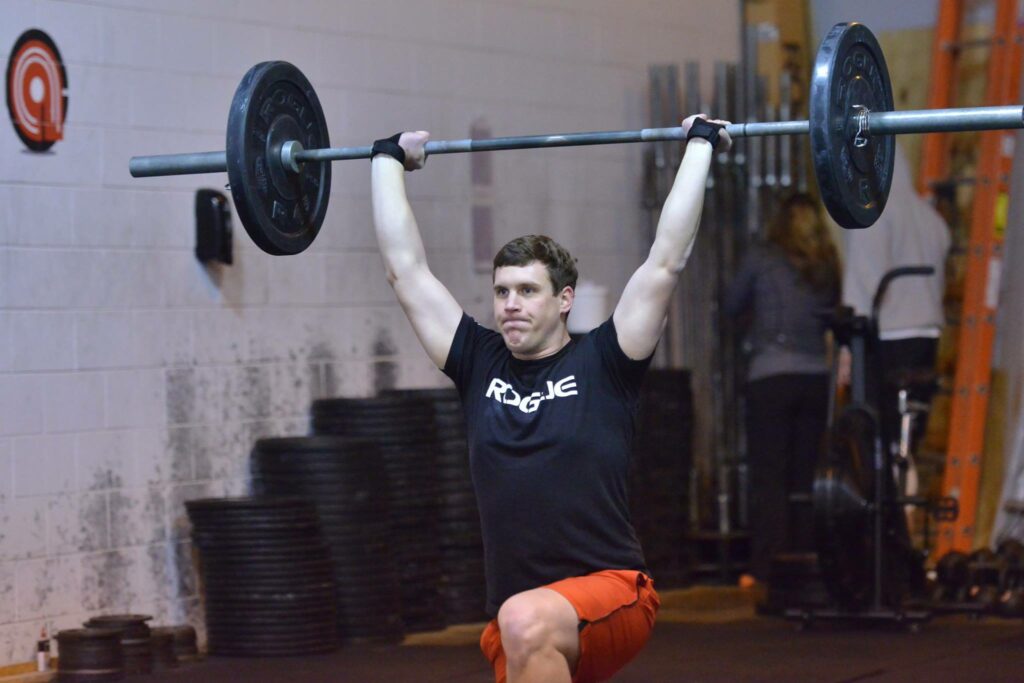 With about 45 seconds left, and still working through a set of chest-to-bar, he dropped off the bar. Immediately upon hitting the ground, he almost crumbled to the ground, grabbing both of his calves in agony. His legs were cramping badly.

He tried to jump right back on the bar, but as his weight shifted into his midfoot, he grabbed his legs again, unable to leave the ground. Another champion performance in the making, Drew was able to get a few more reps before time expired.

A challenging movement that requires upper body strength, combined with the body awareness of an amateur gymnast. And it doesn’t hurt to have a little rhythm so you can string a few together.

We had several athletes get their first chest-to-bar pullup in Open workout 16.1, and a few others who had only ever done 1 or 2 before in their life.

Walk In. Smash Workout. Sign Up For The Open.

Terrie’s story starts Friday night as she walks into the gym about 10 minutes before starting 16.1, with the same smile she sports every time she walks in the door. Having not signed up for the Open, she was just looking for a workout.

She was going to go scaled because she had not tried C2B pullups before. Trey told her to “jump up there and get one.” As has happened a million times before in our gym, she made it look easy. Congratulations, Terrie. You just bought yourself a gruesome 20-minute workout.

Terrie went home that night and signed up for the Open, submitting her hard-earned score of 93 reps. 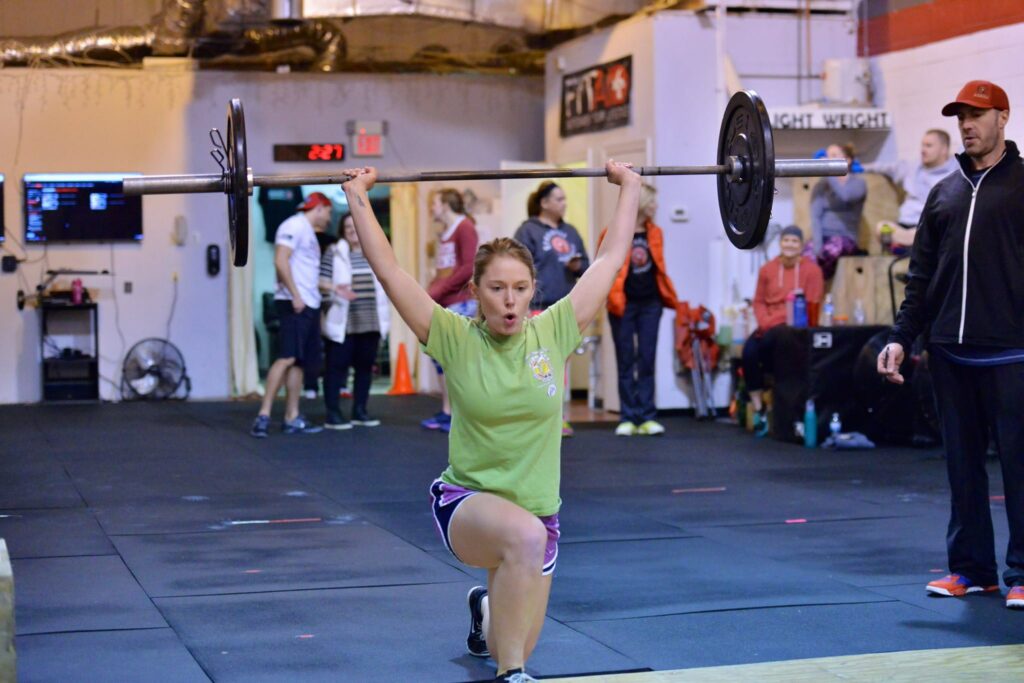 Sarah put forth a great performance in 16.1, but it’s her passion for the Open that made this week so much fun. Some of the 79 athletes in our gym who signed up for the Open, I credit to her. And I’d be willing to bet that none of them regret it.

Sarah’s energy is contagious, and she’s a welcomed addition to our Addict family.

The final performance I’d like to highlight is another first, but this one’s a little different.

TMG took a peek at her Instagram account from last year. Her goal: to RX the Open in 2016.

I watched her battle for every step of that lunge. Trey was her judge, but he was also her coach. Walking her through every rep and every rest, on her incredible journey to 68 reps.