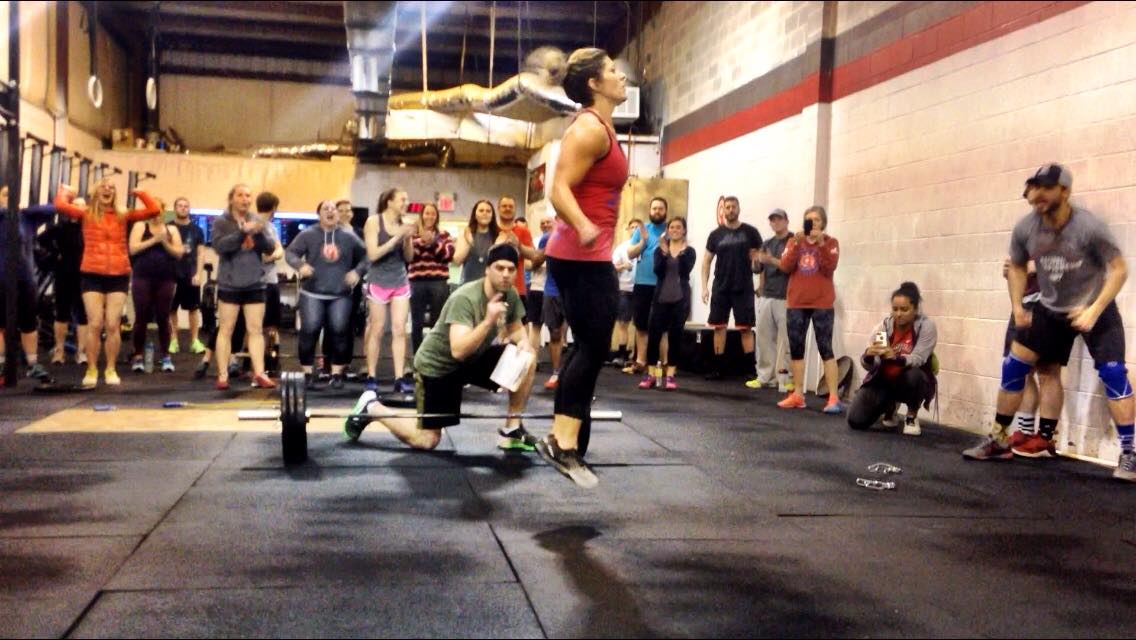 Only a few days following the aftermath of 16.1, we thought we might see a shorter workout that actually allowed us the ability to breathe. Unfortunately, only one of our wishes was granted. With 16.2, there was still no oxygen in sight.

The workout was indeed shorter (for those of us not going to the CrossFit Games), but the lack of oxygen was yet again, very real. For most of us, 4:00-8:00 minutes of…

Despite another gruesome workout, the members of CrossFit Addict once again rose to the occasion, and put on a show. One of our members, Mitch, who works for Channel 8 News, even stopped by to do a piece for the morning news.

Let’s look back on some of the memorable moments.

Erika opted for the scaled version of 16.2, but don’t let that take anything away from her performance. She was the only one in the gym to finish all 430 reps. I wasn’t there to witness it, but it certainly deserves a huge high five.

And while Matt & I continue our rabbit race (Matt got me this week, with one of the best performances on the men’s side), there’s a nice back-and-forth battle developing between Erika & Lauren.

Lauren edged out Erika by 6 reps in 16.1, while Erika was only 1 place behind her on the women’s leaderboard. This week, Erika’s 16.2 performance was 5 reps better than Lauren’s, but again, only 1 place separated the two. Going into 16.3, they’re tied with 51 points each.

Keep pushing each other, ladies. 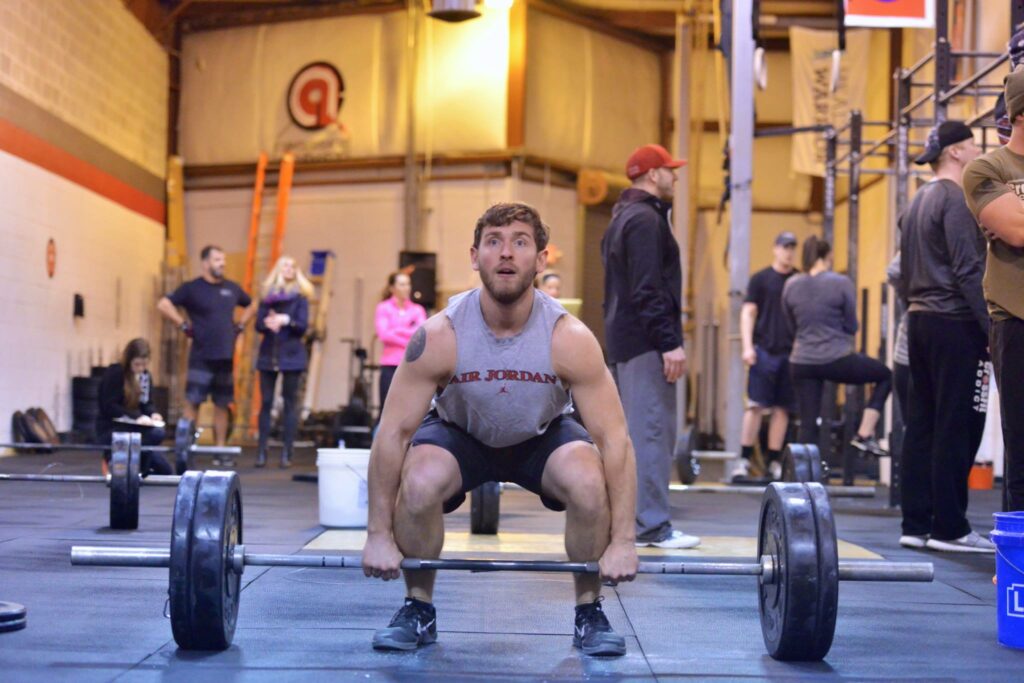 I’d be remiss if I didn’t mention Kyle Jones, the only RX male to make it into the third round. He took 1st place by an astounding 78 reps. You wanna talk about going to a dark place…

Kashia on Thursday (and Monday) Night 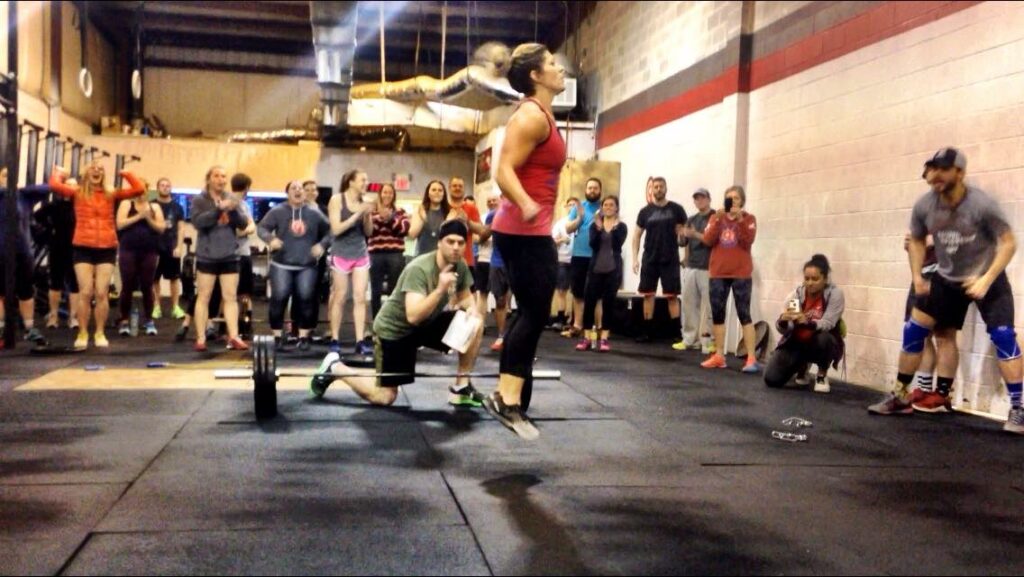 When Kashia first joined our gym several months ago, she instantly gelled with our community. Her positive attitude is contagious, and we’re a better family with her as a part of it. Quickly stepping up to coach our Sunday barbell class, we were impressed with her ability to teach movement.

And now, as she continues to dropkick the women’s masters division in the face, we get to be inspired by her incredible determination to push boundaries.

Thursday night, in front of a packed house, Kashia made it into the 3rd round, completing all of her double-unders with only 2 seconds to spare. Not enough time to clean a barbell that we all knew she could clean in her sleep.

For the second week in a row, we huddled up to conclude our night of amazing performances. Right before we yelled something silly, Kashia stopped the countdown to thank everyone for being awesome. A true class act.

And if that wasn’t enough, we found out on Monday morning that she was 200-something in the world, and in the top 20 in the region (overall, after two workouts). If she could just get 1 clean, that could give her a nice jump on the leaderboard.

Having already performed 100 squats earlier in the day, and with zero intention of redoing the workout… someone talked her into it. Once again, our community rallied around her.

This time, she had 8 seconds left to get… just. one. more. rep. She approached the bar, ripped it off the ground, threw herself underneath it… but just couldn’t hang on. We still love ya, Ka$h 🙂

Note: After taking 15 seconds rest, she walked back over to her bar, and cleaned it, no problem. As the somehow-appointed head judge of CrossFit Addict, unfortunately, I had to call it a no-rep.

Moving on from the intense energy & spotlight that was both of Kashia’s performances, TMG RX’d her second Open workout in as many weeks. Anyone who knows TMG is probably familiar with her relationship with double-unders. It’s complicated.

She fought through some struggles with DUs to muscle out 2 cleans in the first round.

Cheers to a few more margaritas, and showing 16.3 that you’re here to stay.

Debbie Lets Out a Scream

This one really needs no introduction. Words won’t do it justice. I’ll just say this:

When someone asks you to give them your all, this is what it looks like.

Sometimes we joke about our PRs, that if they aren’t posted on Facebook, they didn’t happen. Well, there was some Facebook chatter about the skimpiest of bathing suits making an appearance during 16.2. I think it’s safe to say, none of us took it seriously.

During the burpee showdown between TMG & Christine, to determine the winner of the coveted Lulu prize pack for guessing the workout, there was a guest appearance. Alan, in ALL of his glory, joined in for a few burpees, before disappearing into the night.

There are some things you just can’t unsee, folks. (picture withheld until I get permission)