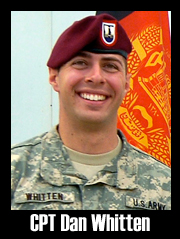 Today we did a hero WOD. If you’re not familiar, a hero WOD is a workout created in honor of a fallen soldier. It’s usually a longer, more grueling version of a typical CrossFit workout (if you can believe that).

I’ll briefly explain the workout below, but the real story starts after that.

The WOD was in memory of Army Captain Dan Whitten.

As Coach Trey so accurately put it, “Apparently, Whitten liked to do work. Lots of work.”

Why Do A Hero WOD?

Well, the surface reason is because it’s Memorial Day weekend, a time when we honor those who fight for our country. That’s a valid reason to do a hero WOD, for sure. But there’s more to it than that. There are reasons we should consistently work these in amongst all of our workouts.

It’s not about me today

Exercise, even when done in a group setting, is still most often a selfish act. It benefits us. While there is absolutely nothing wrong with this, it’s important to step outside of ourselves, and do the work for someone or something else. It’s a universal lesson in selflessness & sacrifice.

I’ll also admit that I know few people who are currently serving, or have ever served, in our military. And I can’t even begin to understand the lifestyle, sacrifice & emotional rollercoaster that they face on a daily basis—while actively serving, as well as after returning home.

And while no amount of exercise, or hero WOD, will even begin to come close to simulating war… to this day, it’s probably the closest I’ve come to wrapping my head around it.

The workout called for 5 rounds. Unfortunately, we ran out of time in our class, and many of us had to go to work, so I didn’t finish all 5 rounds. I was halfway through round 3 when we hit our time cap.

Coach Danielle stopped the clock, not realizing I had planned to finish my third round. When she saw me come in from the run and drop right into my first burpee, she apologized, because now I wouldn’t be able to write down my time. I said to her:

Don’t worry about it. I’m not doing this for time. I’m doing it for Whitten.

They call ’em hero WODS for a reason. These people have given more to this country than most of us will ever be able to comprehend. The least we can do is give them one workout. One long, tough, grueling workout.