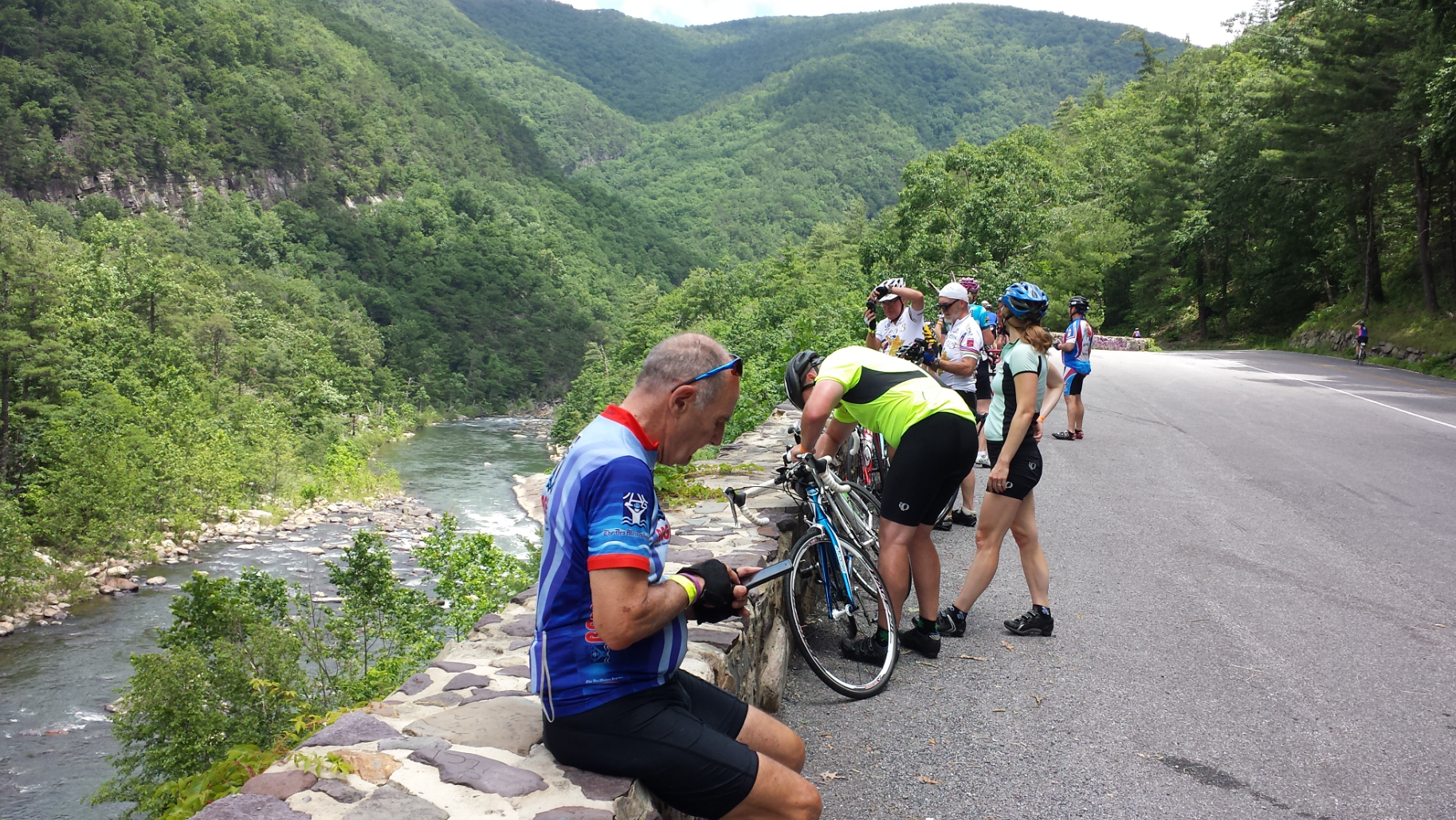 Check out day 1 recap if you missed it, or view the photo gallery

So let’s talk for a second. I’m not the fastest runner in the world. Not even in most of the groups I run with. I haven’t run the farthest, either. But most of my friends would agree that I can certainly hold my own running on pavement and trail. I’m comfortable, confident and at times, a little crazy with my running endeavors.

So, how does being comfortable, confident and crazy translate to riding a bike?

Riding 64 miles, up and down mountains, over the course of 7 hours…

Hills, Mountains, Climbs or whatever the heck you guys call these darn things

They ain’t no joke. Like, for real. You don’t need a crazy GPS bike computer to tell you that those bad boys are STEEP. My legs and lungs confirmed the severity of the incline rather quickly. Right after my eyes told them both not to do it. Those guys never get along with each other.

This cycling event is not a race. Far from it. It’s a TOUR. I’ve mainly either 1) raced, 2) trained or 3) ran for fun. But I’ll tell you what… touring is friggin’ awesome.

All the people here are incredibly nice. Everyone talks to each other. Tells fun stories. Laughs at each other’s corny jokes. And helps one another out.

2 pieces of teamwork that were crucial in today’s ride…

With 1,000+ riders out here, we have to work together to keep each other safe. There are holes in the road, dead animals, trash, tons of other cars (some of which, unfortunately, care more about where they’re going than they do human life).

The hand signals for slowing down & turning are vital, especially when reaching 35-40 mph on some of these downhills.

And a verbal command of “car up” or “car back“ could literally save your life. Dead serious.

All of us were on the same team today. And I just love it when everyone plays nice.

2. My team (and new friends) stuck with me

I am, by far, the weak link in our group of 4. There were many times when they could’ve left me in the dust, but they always slowed down and waited. They asked me how I was doing, and always kept an eye on me.

Team, I’m 100% serious on this. I could not, and would not, have done this without you. Thank you… times 64 (because that just seems appropriate).

…was gorgeous. That word is typically reserved for women referring to their girlfriend’s new sun dress—or some 20-something, hot, new movie star. But trust me. Today’s ride was every bit as gorgeous.

Normally I don’t stop to take pictures of dead guys’ tombstones, but my man Stonewall Jackson was there, so we had to stop and say what’s up.

I did handstands (and other funny things) where the cadets of VMI do their military drills.

I got my feet wet at Goshen’s Pass.

We hung out with girl scout troops at the first rest stop. Firemen at the second. And the sweet women of whatever church at the third. Don’t let the white hair fool ya, folks. Those ladies make a MEAN PB&J… real heavy on the P.

The 2 main climbs were ridiculous. Still trying to figure out how they only got TWO out of that, but whatever. I almost made it through every one, but had to walk halfway up one of them around mile 50.

The descents, while a treat for the legs, were playing tricks on my mind. And by tricks I mean I was scared out of my mind. I probably hit close to 40 mph on more than one occasion. One wrong move, and you could find out what it feels like to be the bottom of a snowboard (minus the soft snow). Not a highly sought after feeling.

My legs didn’t feel too bad when we got back, but 7 hours of just about anything will wear you out.

So naturally, first, I hit the food. Lunch was a vegan’s treat… again. Salad, with tons of veggies. And a veggie burger.

After devouring that at about the same pace I rode my bike today, I had to find Mother Nature’s best recovery spot. The river.

Much of our ride was alongside a river, and she was calling my name the whole time. So I headed down there with Michelle. It was everything I had hoped for, and then some. Perfect temp. Water flowering fast. Not to deep, not too shallow. Nature wins again. Come to think of it, when does she not win?!

The night ended with a peaceful, relaxing dinner, followed by a showing of Premium Rush, a movie about bike messengers going rogue. It probably got 1/10 of 1 star, but of course I stayed up to watch the whole thing.